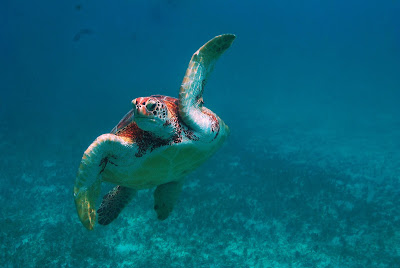 Happy New Year! Sorry I didn't have anything interesting to post, we were kind of lame and stayed in this year. On the bright side I got to review some neat underwater photos as I continue my posts of our awesome Christmas vacation.

We took our first excursion on Day four. We went snorkeling out at Turtle Bay and a Cenote (fresh water cavern). I cannot take credit for the sea turtle picture, but I did pay for it as part of the photo package so I feel entitled to post it. The snorkeling at Turtle Bay was right off the beach so the visibility was pretty poor. 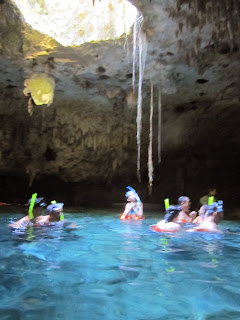 The Cenote was a lot more fun. The Cenote (or Sacred Well) were entry points into an underground river where the natives were able to get freshwater. The freshwater was very clear and you could see a surprising amount under water. Since it was so dark I didn't get very many good shots, this was probably the best one (and still blurry), it was neat having natural openings that illuminated the cavern. 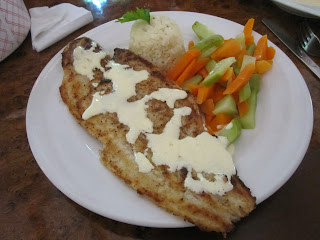 For lunch we had fresh grouper, a very plentiful white fish in these parts (we saw many of them during our snorkeling adventure.) It was served with a "Crema De Ajo" cream of garlic described as a combination of oil, garlic, cream and egg. (sounds like a mayonnaise). It was originally on the table with the salsa and pico and we thought it was another dip for the chips. It was a simple sauce on a simply spiced grouper the combination was delicious it was accompanied with some steamed carrots and chayote and white rice. 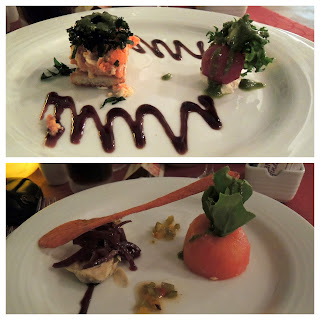 For Christmas eve dinner we dined at El Mediterráneo it was the only reservation restaurant we could get into. Bummer that we couldn't get into Chef's Plate, but it turns out this was good find as well. My salad was the Tomato Custard (kinda like a quiche) it was accompanied by a Caprese Salad bite. My wife's salad was an Arugula salad with a fennel jam and spearmint vinaigrette. Maybe I'm too use to the excess' of American cuisine but these seemed pretty small for a salad course. 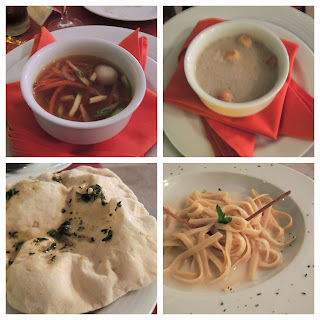 Soup course consisted of a Quail Consomme with a soft boiled quail egg. The Consomme was delicious with very rich flavors, clearly they had to have spent some time on it. My wife opted for the yummier Cream of Fennel au Tomato Soup. They served this course with what they called home made focaccia but it looked and tasted more like Indian naan served with Pesto. The fettuccini alfredo's pasta was homemade and had a nice bite, but the sauce was a little thin. 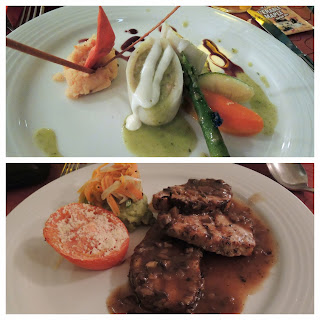 For our main course the top dish was the Calamari all Florentina, a stuffed calamari dish with a spinach sauce and the ever present mashed potatoes (this time with sundried tomatoes). I had the Pork Fillet Venetian Style, the pork was served with a red wine and wine mushroom sauce, my flavor of mashed potatoes was "pureed broccoli" which was actually pretty novel and actually worked pretty well.