Pork Calabacita kit and testing out my new kitchen 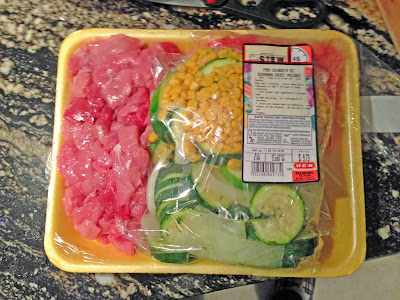 I know I've been quiet lately, it's been a busy year for me. My latest excuse is that I moved last week.

I will just say this about my move: Paying movers to pack your stuff and haul it to the new place COMPLETELY WORTH IT.  In half a day they had everything packed up whereas it took us nearly a month to pack up five boxes worth of what we considered valuable enough for us to hand pack and move.

Anyhow we've been in a mad dash to unpack and put everything away because we have 12 people coming over for Thanksgiving dinner. I question my judgement inviting everyone but what's done is done.

So why this post? Well, one I need to test my new kitchen stove to make sure I can cook dinner in a couple of days. Two, I wanted to post about this new thing they're doing at the local grocery store (but apparently only this one by my house not the rest of the chain) where they are packaging stew and soup kits (which is not new) with raw meat (which is new). This is interesting because usual soup kits contained canned chicken or at best pre cooked (read, super dry) chicken breast. Packing with raw meat means you can control how well you cook the meat.

It's pretty simple, the pictured "kit" above is the Pork Calabacita. My checkout person noted: "oh, I just thought this was something my grand mother made for us when we were kids, I didn't realize it was a thing everyone ate." So at least I know the veggies and pork content looked right. 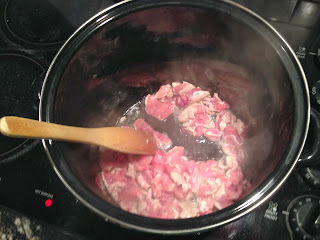 The process is pretty simple. They give you the steps right on the label. We start by browning the pork. Then dump in zucchini and onion pack, tomatoes, water and spice packet. (special thanks to the previous owners for leaving me the pictured brand new enameled soup pot) 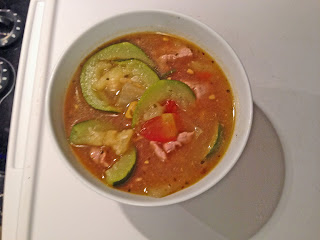 I love this idea because they portion out the vegetables for you. In the case of the chicken soup it included a bit of corn on the cob (1/8th cut cobs), cabbage and potato but only enough to make the soup. This means I'm not stuck with 3/4 head of cabbage, half an ear of corn and half a potato or stuck with so much soup that I'm eating it all week.  For just under ten dollars it's a pretty good deal. I suppose if you want to be frugal you can make these kits yourself and freeze proportioned kits yourself, but I'm not convinced you'd save much.

Next challenge: Thanksgiving! Good luck to the rest of you that have a big meal to prepare ahead.
off topic pork soup stew yammering zucchini