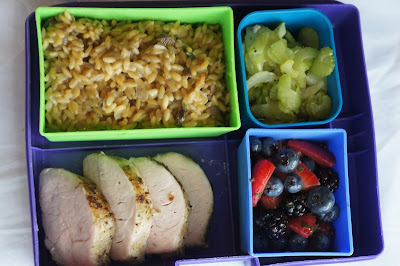 There once was a bento with the greatest of hope but something terrible went wrong. Twice there were attempts to recover it, even substitutions were considered but after a chain of colossal failures it was locked away forever to be known as "the bento that never was" (I considered the "bento that shall not be named" but I may try that as a theme one day).

I mentioned in my last post I bought a cookbook from one of the owners of Masala Zone, "50 Great Curries of India" by Camellia Panjabi. I picked out four items and went to work giving it no thought since I've done Indian themes in the past. I prepped all of the food and created my cooking plan the day before just like any of my meal preps. And then..... 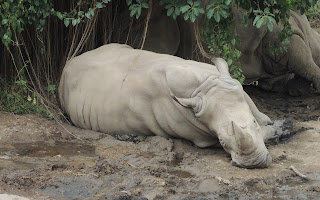 I will state up front that I do not blame the book whatsoever. Several things contributed to "the great fall" 1) metric measurement conversion which were subsequently upscaled for 4x (so math error and cooking a dish at large scale) 2) not been cooking for a while 3) disbelief that I could fail so badly (hubris). I've only once swept a creation off my board and into the trash, folks in my kitchen stood in disbelief because they thought it tasted pretty good (I accidentally halved the sugar in a cheesecake recipe) but I don't serve failure to anyone. This was far worse, every bite I took as I tried to fix the situation tasted like shame, failure, and utter disappointment. (Yes, you can taste those qualities) When the second dish started to fail, I just called it quits. This picture of a white horned rhino I recently took really captured how I felt: dejected and inconsolable (I thank my wife for trying). I was moping around for a few days.

All kidding aside this bento was named the "easy win" because I really needed something to rally around my worst cooking experience ever. EVER! 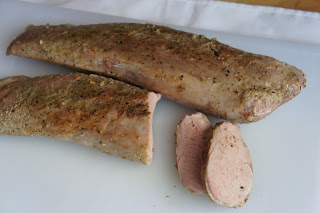 I had to get back on the horse, it had been months since I had done a bento let alone any type of cooking for myself since I had been traveling for work (see previous posts). I needed to design a menu that let me multi-task at leisure (meaning set a few things in motion and let it come together).  Obviously a sous vide dish was in order. I blended up a quick "italian herb" mixture of rosemary, oregano, garlic flake, thyme, red pepper flakes, salt and pepper dusted up a bunch of pork tenderloins the night before and vacuum sealed them to let them sit over night in the fridge. This meant that on cooking day, I just dropped those bags into my Sous Vide Supreme and let them go for about four hours as I puttered around. After that I took 30 seconds per side to sear each tenderloin which really took about three total mins for six tenderloins. 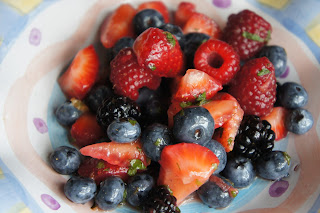 For the rest of my dishes I trawled thru my "easy", "simple", and "fast" tags on my evernote recipes. I tackled dessert next. Simple macerated fruits. I used some sugar to draw out moisture from the berries and added lemon juice (and zest) and orange juice (and zest) and some chopped mint. (prep was washing berries and chopping mint). I tossed everything together right after I turned on the sous vide rig so dish #2 was basically in the can right after #1. 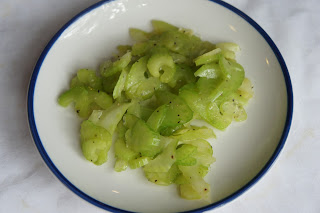 So I mentioned multi-tasking with leisure, what is Multi-tasking at non-leisure? It is what I tried to do last time, set one thing in motion while starting another set of complicated tasks on another dish while keeping the timing right to finish the first, repeating until you magically finished all of your dishes. This requires prep work (chopping, mixing spices etc) much like you see on cooking channels when the chef magically pour in a small bowl of "this is JUST some chopped garlic, minced ginger, oregano, thyme yadda yadda". Some poor schmuck had to peel and chop garlic, ginger and all the fresh  herbs and measure all this stuff out so that the 30 min meal doesn't actually take one and a half hours. This dish is a Celery Kinpira, a deceptively simple is a great example of prepping taking longer than cooking. It's a simple sauté of celery in olive oil plus salt and black pepper. Kinpiras are usually prepared with root vegetables but vegetable stems are often substituted. The technique is a simple sauté and quick simmer to soften the vegetables that are cut thin so they cook quickly.  It took only a few mins to sauté and simmer after I took the celery out of the fridge. So #3 was done within minutes of letting the macerated fruits start to sit in the fridge. Technically I was multi-tasking three dishes at once but it really didn't feel that way. 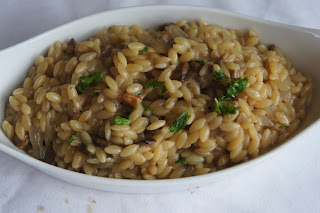 Finally, I needed a bit of starch/filler to round out the meal. This by far was the "hardest" dish. It's a Orzo "risotto" with porcini mushrooms. Prep here consisted of chopping some onions, soaking the dried porcinis and cracking open some chicken stock. Unlike real risotto, the use of orzo let me get away without pre-heating the broth and sitting around stirring constantly while carefully adding broth one ladle at a time. Once you cook the onions, mushrooms and toast the orzo, you just dump in the broth, stir, wait for a boil and turn to simmer and walk away. Instead of using the rice starch to help thicken you just dump in a bunch of parmesan to give you that creamy texture. This dish took the longest at around 30 total mins (counting the simmer time)

Active cooking time took me about one hour if you put it all together (minus sous vide wait time which I used to watch a movie at the theatre), if you add prep maybe another hour. But if you considered I prepared nine total bentos with just about that much again leftover for myself, my wife and my family (parents just moved in to town). That was a heck of a easy win for 18, four course meals. I felt good about my dishes and can't wait to get back into the swing of things I just need to get past the last of my traveling.

More traveling so I'll be posting about my whirlwind six days in Taiwan.

P.S. As always, if you want any of these recipes, I'm happy to post them if you request them (just post a comment).  I don't generally post them since they'd clutter each entry with four separate recipes that I'm not sure people want, but please speak up if you want one.