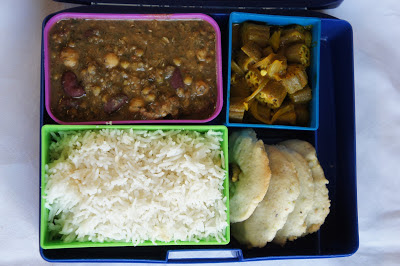 I actually made this bento a few weeks back and only managed to post it today. With a kitchen remodel and running into some health issues I've not really had much time to cook let alone post so my apologies for the sparse content.

After our visit to the Afghan restaurant Helmand during our trip to Boston I decided to dig a little deeper into the cuisine. Much of the middle eastern cuisines have a lot in common, they share a lot of the same cooking techniques as well as ingredients. Yet as you move across the geographical regions each country has its distinct spin as new ingredients become incorporated and others go unused. 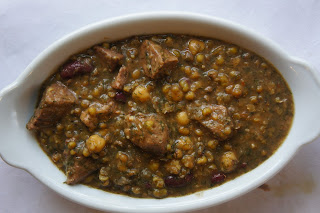 This first dish is called Mashawa, it's a lentil beef stew/soup. It's seasoned with dill and normally served with yogurt. I left out the yogurt since the dill provided plenty of sour "tang". Although technically it's a soup it came out more like a indian "dal" curry dish as it's pretty thick so I served it with a bit of basmati rice. This is a great example of what I was talking about, the use of dill seems a lot more common in Afghan and Persian cuisines and tails off in usage as you move further east. 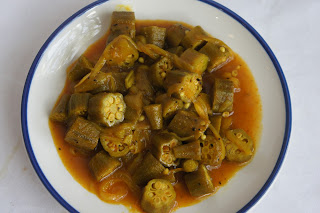 For a vegetable side I went with this Qorma e Shast e Arus, stewed okra. I fretted quite a bit over the okra slime factor and tried everything I could but ultimately I was unable to escape the dreaded slime effect. I'm not too bothered by the texture, in fact I kind of like the texture of stewed okra but I can see how it might be off-putting to a lot of people. I've seen quite a few variations on this including serving the okra whole (and avoiding the slime) but I chose to slice the okra to allow the side dish to actually fit in the box. Turmeric gives the dish a yellow tinge and outside of salt and pepper the only other spice used. 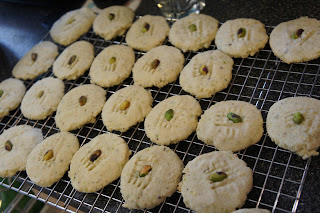 For dessert Kulche Birinjee which is a rice flour pistachio cookie. The texture of the cookie is very grainy due to the use of the courser rice flour. It's spiced with cardamom and turned out to be a pretty big hit. I brought in 60 extra cookies to work and they were gone within 10 mins. The original recipe called for a pretty short cooking time of 14 mins. I tried some at 18-19 mins which gave you a bit more crispy brown cookie which I think I prefer. Although not intentional, this bento turned out to be gluten free.

I have some travel coming up so hopefully I'll post a few more here soon. I'm hoping at some point I'll get to do another bento but the next few months don't look too promising.