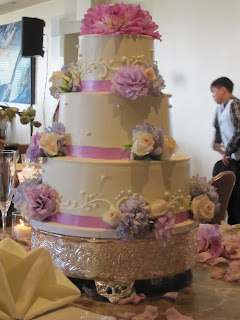 So I took a last minute trip which included a stop to LA for a wedding reception for my girlfriend's friend. It was a great reception the groom was Vietnamese and the bride was Taiwanese. The banquet was a fusion between the two with the hosts repeating everything in English, Chinese and Vietnamese (very impressive if not tiring for them). There was plenty of singing and dancing but most of all food. I'm going sparce on the words and more with the pictures. I've got a few more posts coming from this trip but I wanted a chance to document everything. So I present to you stop #1: LA wedding reception. Sorry about the pictures, they were done with my cheaper point and shoot and as the night went on it got pretty dark. I need a high speed point and shoot that fits in a pocket anyone got any solutions? 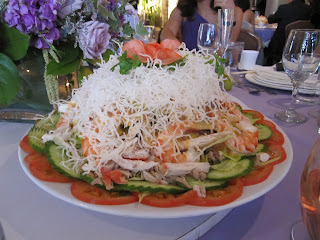 Prawn Roasted Chicken Salad. These were very large prawns dressed in a mayo based dressing. The topping you see is a fried rice noodle. 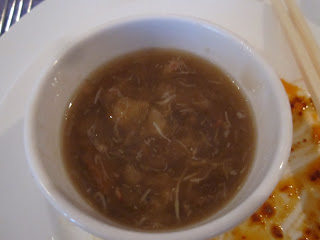 Fish tripe and Crab Soup, yes you heard that correctly Fish Tripe. Who knew fish had big enough stomachs to be put into a soup. It's a first one for me. Very taste, the base was reminiscent of a hot and sour soup being that it was flavored with soy sauce and had a thick cornstarch texture. The "tripe" reminded me of the same texture as shark fin soup, a soft kind of crunch taste. 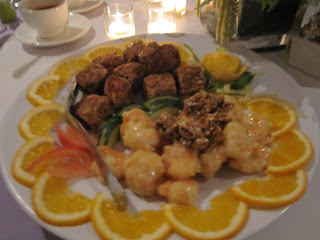 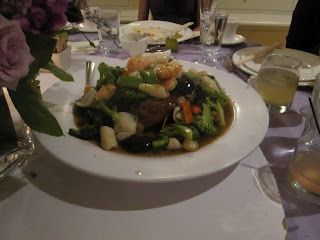 Seafood braised Duck (are you getting the idea that asian cuisine puts a premium on seafood?). The duck is a bit buried under everything else but it was pretty tasty. Since duck has such a nice fat layer under the skin my preferred serving is a crispy skin, the sauce of the seafood kinda got it all soggy. 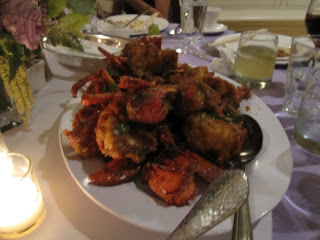 Furiwa's House Special Maine Lobster. The lobster was cut into large chunks in shell and spiced and wok fried. Very nice flavors in the sauce. This is a typical asian way of serving shellfish, you need to pick out the meat yourself, this is probably a turn off for most Americans but there's a lot more flavor in the sauce when you're cooking the lobster shell in. 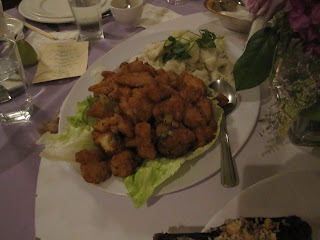 House Special Fish Fillet, not much to say here, it's a fried fish. 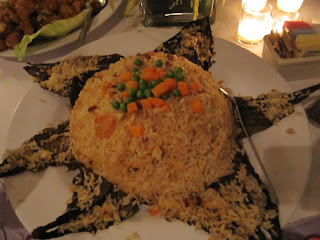 Lotus leaf wrapped fried rice. I'm not sure what the lotus leaf is doing for the dish, but it was a delicious fried rice. 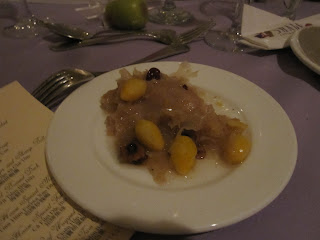 Finally dessert is a "whipped taro dessert" which is a taro root which has been mashed and whipped into a light consistency adding sugar, peanuts and dates. Taro has both a sweet and savory application in asian culture, but it has the extra super power of being presented in many ways, fried, steamed, boiled, mashed as a dessert or as an side dish to a main entree. It's a very versatile root vegetable. Sorry that the picture isn't a bit more appetizing, but it's the best I could do without hitting the flash.

Ok that's it for now. I've got many other pictures to process on this trip, hopefully I'll have time to get to post them all. I'm going to try to keep all the food pictures here and the rest on my personal blog (ok my OTHER personal blog).
asian chinese yammering

stevenjared0853 said…
Great to see this awesome wedding reception photos. I am very happy to see delicious food served there. Now I also want to arrange tasty food for my brother’s wedding at one of Chicago event space. Have already searched out famous catering service and will hire best one for the day.
November 15, 2017 at 3:36 AM