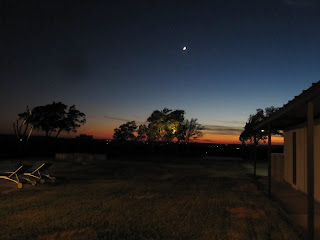 Hey guys, sorry about the lack of bentos lately. Work has really ratcheted up and free time has gone down to a minimum. I've had a few photos and off topic posts that I wanted to put out but simply getting a moment to write a quick post has been difficult. I'm actually doing this one over my lunch just to take a break from my deluge of emails and meetings. Anyhow, enough belly aching. 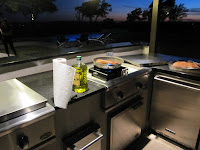 I had the great fortune to cook with a long time friend and coworker. She and her husband use to have a Persian restaurant in town and both are fabulous cooks! She invited me to help host/cook for a party of our friends just to get everyone together. We've done this in the past and it was a wonderful opportunity to learn a bit more about Persian cuisine. So given the chance I immediately jumped on it. Besides, her house is beautiful and her kitchen a joy to work in just look at the view (from the title shot) and this outdoor/kitchen grill. The indoor kitchen was just amazing it really has everything I could ever want in a kitchen. I got to watch the sun set two nights in a row as we cooked, simply amazing. I need a kitchen like that!

Anyhow below are all the dishes we made, I assisted and took notes on most of the dishes and contributed two of my own. 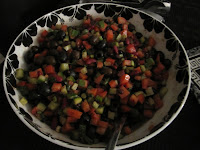 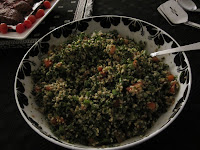 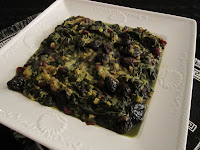 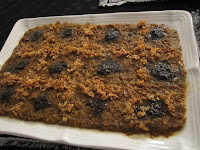 Spinach with dried cranberries and prunes. Bademjan with lentil - Eggplant with saffron sauteed onions and yellow lentils. This was a nice stewed eggplant dish great just as a side dish or as a dip with some pita. 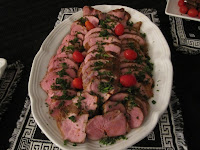 My two contributions: East meets middle east roll, Moroccan spiced chicken breast with saffron rice rolled as a sushi roll and served with a dynamite sauce (from my night cooking for the Flying Carpet as guest chef) and a spiced Pork tenderloin prepared sous vide. I was able to produce four of these all in one go in my little Sous Vide Supreme. I think I need to put up ads or get some sort of commission from these guys, I sure i've personally sold a few units just by cooking for people. 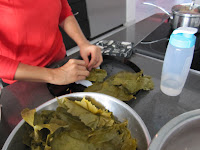 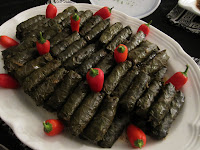 Next up were the dolmas. In the Mediterranean/Middle Eastern cuisines there are many variations on stuffed/rolled grape leaves. Some use dried fruits and make it sweet, some savory, vegetarian, beef, lamb, in this case used beef and added lentils. Then there's the preparation/sauce used to cook the dolmas which span tomato based, simple broth or in this case a mixture of lemon and garlic topped off with water. Like tamales, dumplings, raviolis and piergo, dolmas are one of those cultural foods that you grab the bowl and ingredients stand around the counter with friends and roll out a few hundred. I like how ever culture has at least one of those communal cooking foods. It's a great way to get folks to participate and catchup on how everyone's been doing. 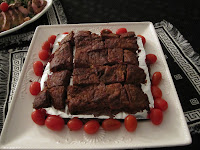 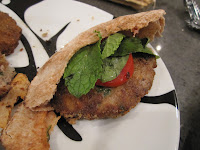 To finish things up we have Kookoo made with sweet potatoes and beets. Last time I learned to make a kookoo sabzi which comprised of various chopped greens. The thing in common is it's mixed with spices and egg and it's skillet fried. It's kinda like a frittata with a lot less egg and a lot more vegetables or a fritter but a lot less fried. Last but not least was the "cutlet" that's pretty much all I got for the name. We were chatting with a Russian coworker and she mentioned a similar dish in the Ukraine that sounded very similar "Kotlet". We served the cutlet as just a little beef patty, but as a snack the previous night we made a sandwich with a bit of pita, fresh tomatoes, basil, and mint. (which made for a nice picture)

I had a wonderful time hanging out with friends and sharing food. It was a lot of fun and I can't wait to do it again! I hope to do a bento this week I might get one or two in before the holiday season takes up all my time. Thanks for dropping by!
dinner party eggplant off topic Persian pork tenderloin