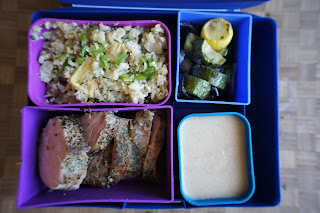 So everyone around the office is doing the Crossfit training and the Paleo diet. It's really paying off for some of them. One guy has lost a total of 50 pound or so on just diet alone. That's the guy with the best result, others have similar, but with exercise and still others very small changes. Anyhow, since a bunch of the guys went on the diet they haven't been able to participate in my bentos. I told them I'd make a lunch just for them and they'd all be signed up so they didn't have to compete with the email crowd. I don't want to get into the details of the whole paleo diet, if you are curious you should buy the book or go to a whole host of websites that are dedicated to the thing. Basically it comes down to lean meats and no processed foods. It's a low/slow carb diet, no sugar, wheat etc so it's a very friendly diet for Gluten free folks. Without further ado, I give you Paleo Diet Bento or Paleo Bento (which sounds nicer)

Paleo comes from the word paleolithic so it's caveman food. That's a generalization of course there are things on the list that I wouldn't expect a cave man to be able to obtain. They might not be smart enough for car insurance but they apparently know what it takes to be a lean mean exercising machine. Anyhow what better cave man food than pork. Big ol slab of meat, in this case I sous vide'd up four pork tenderloin and employed a taragon herb mix that I had in the pantry (yes, I checked it didn't have gluten). The pork is hardly recognizeable with it's nice pink hue. I cooked it at 134F for about four hours. Honestly the texture of the pork is to die for, very tender very juicy. I've gone on and on about sous vide cooking so I'll just let you look one of those posts up. All I've got to say is "super yum".

This is probably one of the neatest things I wanted to try in the paleo diet, they substitute rice with finely chopped cauliflower. I wouldn't go so far as to call this a substitute for rice, but the flavors of this Asian "Fried Rice" was very popular with my diners. I used fish sauce for the salt component as it turns out some fish sauce brands are not gluten free, just like soy sauce. Luckily my brand was gluten free. I got the recipe here from Nom Nom Paleo (a great resource), the meat was bacon and was what I fried the onions an mushrooms in. I suppose with a flavor base like that you really can't go very wrong. There's still something missing without the starchiness of real rice, but as a filler it does a pretty descent job. I wonder if you could get away with doing this as "sushi rice" and make some sort of paleo sushi roll. I don't think the cauliflower would hold together, you'd probably have to have some sort of mayo/sauce binder.

On the paleo diet you're there's a lot of meat involved but unlike Adkins you can have your fill on veggies, so I made Roasted Summer Squash. It's actually a very eye catching dish when fresh out of the pan, the red onions and the yellow and green of the squash/zucchini make for a good picture. I haven't gotten thru the whole paleo book yet, but searching the internet for recipes and ideas on food there seemed to be a pretty generous use of coconut oil and coconut "amino". Coconut oil is a rather strange ingredient, it's a solid 76F. It looks like candle wax but has the consistency of melon and if you get any on your hands it immediately turns to liquid. I made the mistake of trying to incorporate the coconut oil as a solid, but quickly turned to the microwave to make it easier to homogeneously coat the squash. The only downside here is that the squash once refrigerated has this white coating that looks a bit unappetizing. Once heated it looks and tastes just fine.

Dessert is one of those difficult things with this diet, I didn't have a lack of recipes, but just from initial reading you're kind of limited to fruits. Some of the recipes I found went with chocolate, but there is some contention on whether chocolate is ok. Would the cave man know how to roast and ferment cocoa beans? I bet the cave man would know how to get honey but no clear direction there. Either way the point is no refined sugar but stay away from sweet in general unless it's fruit (and even sparingly at that). So I went with this Paleo Apple Pudding. I didn't really know what apple to go with so I went with some Jonagold (a hybrid of Johnathan apples and Golden Delicious) it had a pleasant sweetness and a crisp texture. I was afraid of the mealy texture of the Red Delicious (I'm told they are less so when uber fresh) and I was afraid of the tartness of the Granny Smith apple. I was told the Jonagold was good for cooking. As it turns out I found the "pudding" to be a bit tart, I warned my diners that they could deviate by adding sugar or honey but I stuck with paleo version. Turns out everyone really liked it. The apples were cooked with coconut milk and cinnamon, the thickener was coconut oil. Once chilled the pudding set quite nicely, I imagine that the coconut oil also muted the tartness which is why no one else seemed to notice (that or they all liked tart desserts)

Anyhow, there's my foray into Paleo diet, I may try to do another one or two of these since there's a demand for it. Thanks for dropping by, and as always if there's a recipe you want just post in the comments and I'll make sure to put it up here for you.