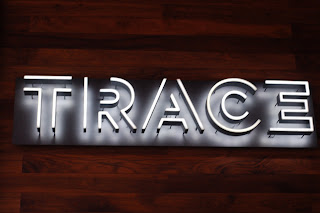 It's been a while since I've been to one of these blogger events, and I was really excited when I took a look at the menu and started reading up on the restaurant. Trace restaurant is located at the W hotel here in downtown Austin. It's a beautiful restaurant featuring four different themed "lounge bars". It has a nice and quiet atmosphere. Trace takes great pride in sourcing as much of their food from local farms. I spoke with Valerie Broussard their resident "forager" (pictured below) and she explained that they worked with the Sustainable Food Center on a token system which enables farmers to quickly get paid and bills the restaurant and hotel which pays on a more regular business cycle. Sounds like a win win proposition there. The menu changes a bit depending on what and where they can source various items. For instance our winter garden salad came from Springdale farms, where as on the website menu it says Animal Farms. And a few of the items we did taste didn't appear on the web menu at all. Chef Paul Hargrove was our creator tonight, unfortunately we didn't get a chance to meet him, but Valerie did a great job hosting us and representing the Chef.

There were plenty of fancy cocktails to be had. The one pictured above was a strawberry with black pepper nice and refreshing without being overly sweet. There was another that I had at the bar which was scotch with pear necter which is one I'll definitely go back for.

We were treated to six mini courses, above you see the winter's garden salad. It was very interesting, the Chef stylized this much like a mini garden. He used crumbled rye bread as "soil", and bit of tapioca, and baby carrots all in a nice hazelnut vinaigrette. The lettuce was sourced from Springdale Farm. The second course is the Heritage Farms Beef Tartar. Extremely well seasoned and very tender. The quail egg was soft cooked sous vide and accompanied with a light lemon based sauce. Delicious and I think it qualified as my favorite for the evening.

Next up Braised Pork Belly (from Richardson's Farm) it was served with a banana puree and a pineapple confit. The sauce had a nice sweet and smokey flavor and the dish was delicious, the big surprise for me was the pineapple, apparently it was steeped in with jalapenos which gave it a nice kick and fermentation which I believe gave it a zing. To go with the turf we had some surf in the form of this Crispy San Miguel Snapper. They served this skin side up and seared (the little spiky looking things at the top were the scales) with a bit of Preserved Oregon Truffle. This was quite delicious the fish was fall apart tender and the cauliflower foam was very interesting. It was definitely a nice counterbalance to the heavier pork.

Last "main" dish was the Banh Mi, which featured short rib from Niman Ranch and Charred Cilantro Creme Fraiche. The meat was extremely tender and juicy and I loved the creme fraiche. I definitely didn't expect to see Banh Mi on the menu and looking on the web menu it just so happened to be something the Chef whipped up with what he had. Finally dessert was the Chocolate Cherry Stout Cake. It was very nice looking dessert, the chocolate sauce had a beautiful gloss to it. I had expected the cake to be dense and very chocolaty it turned out to be quite a bit lighter and the sour cherry sorbet was a good pairing with the sweet chocolate cake.

I had a great time, got to talk to some of my blogger friends and catch up even met some new friends. Thanks so much to the staff at Trace for being such wonderful hosts. Everyone was super nice and knowledgeable. I'm going back Monday so I'll post up updated pictures of the food I will order.
event farmers market local yammering