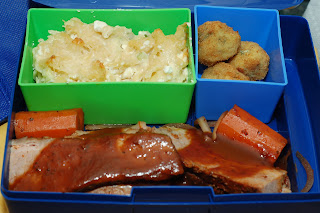 So I figure since it's the holiday season I'd take the time to pick a related theme. Hanukkah is a great excuse for me to do more research into the Jewish cuisine, I loved my dip into Rosh Hashanah bento and I enjoyed learning the history of the cuisine. I think I spent a week reading up on the Hanukkah food trying (in vain) to design a healthy Hanukkah bento. I think I learned a few things and my diners so far seemed to have enjoyed themselves.

The picture at the right is the brisket, but I neglected to put in the veggies and the final sauce you see in the bento box in the title picture. It's a braised brisket with a red wine reduction. Hanukkah cooking is mostly about preparations the day before so that no work is happening while the Menora is lit. I think the brisket could have done with a few more hours of cooking for my taste but every recipe I saw called for a three our cook time and since I like to at least try things the traditional way once we have what we have. The braising liquid was reduced greatly to give a nice thick sauce that was well worth the wait. The onions and carrots sweetened up nicely during the braise. The flavors really sunk in overnight, so clearly there's something to the traditional preparations.

Like the Rosh Hashanah kugel, I went with a savory Kugel (opting for noodle this time). A lot of the kugels I went thru all demanded sweet kugel, I personally don't like sweet so I hunted high and low until I found a series of savory kugels that seemed to fit my palate. Sour cream, cottage cheese, and parmesan were the main players on this dish. Dairy actually fits quite prominently in Hanukkah foods because it commemorates Yehudit (Judith) a Jewish Heroine that helps defeat the Assyrians. There's a big back story there that I won't go into, suffice it to say dairy and fried food are everywhere in Hanukkah dishes. I went for low fat cottage cheese and sour cream to help lighten things up as much as possible, and cut the oil butter in half. I added a few of the spices and sauces from another kugel recipe to compensate for the loss of fat. I can see how the "full monty" version would be very tasty and rich but I'm proud to say my "lite" version was pretty tasty too.

Next we have fried Ricotta balls. I took this recipe from Food Networks (courtesy Mario Batali) I'm not sure how this is Jewish except that it both has dairy and fried food. How does fried food fit into Hanukkah? Well the fried food features oil which symbolizes the miraculous oil that was able to light the Menora for long celebration of Hanukkah. The recipe called for goat cheese ricotta, but I couldn't find that, the ricotta was really wet and it was a struggle to hold the shape under the violent frying process. I tried my best to let the ricotta dry but I think the better bet was to double the ricotta and wringing it all out in cheese cloth. A very tasty morsel just very difficult to execute.

Finally we have Roasted Chestnut and Parsnip soup. This is probably the one and only time I'll roast chestnuts. It was humongous pain to shell and peel not to mention hard to find and expensive. The alternative was to used canned chestnuts but honestly I've never ever seen canned chestnuts, and if such a product ever existed now would be the time it should be on shelves. All the hard work resulted in a very tasty the soup, it was very creamy and thick and hint of the parsnips came through while the chestnuts added a really nice richness to the soup without adding much or any fat to thicken the soup up. I liked the result but I don't think I'll be adding this to the "must do in the future" list.


I'm so glad to have done the research to understand the symbols behind the food I loved reading up on the history and stories. I really enjoyed making the bento, a lot of it could be done in parallel so it was a simple execution. Happy Hanukkah folks!