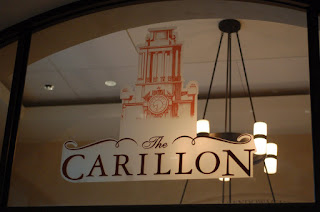 I had the fortune to be invited to a special blogger event at the Carillon to celebrate their official "hard launch". I've been very curious about this place ever since the "soft launch" was announced about a month ago. The restaurant is located on campus over at University of Texas at Austin and seemed to be an unusual place to find fine dining. As an alum, when I hear UT and restaurant I instantly flash back to my dorm days eating in the dining hall, or the bevy of fast food cheap eats around campus. This was clearly *not* the case. The Carillon is located in the new AT&T executive education and conference center, which is actually a hotel, classroom, conference center and restaurant(s) all rolled into one. It was neat seeing fancy dignitaries intermixed with grungy college students.

This restaurant is a pretty classy place, far bigger than I had imagined, but they did a good job at segmenting the large area to make it feel more cozy, but it definitely still had the character of UT. Definitely a nice date spot right in the heart of Austin. I'll do a re-edit later and post pictures of the dining area for some reason I don't have them. Very open space with an open view of the kitchen, really cool arches full of quotes, as I said very university feel to it, but amped up with some upscale class.
EDIT got those pictures in.

Our hosts for the evening included Deliah Huang who does PR and Marketing and Keith Purcell who actually runs the entire Conference Center. Both extremely nice folks that eagerly made sure everyone was well fed and had a drink in hand. And I'm not kidding, there was *so* much food, if anyone left there hungry then clearly they were not standing in the same restaurant. Sorry about the fuzzy picture, but it was the only shot I had.

Chef Josh Watkins spent lots of time on the floor bringing out platter after platter of food. It's very clear he's very passionate about food and was very eager to share and talk about every dish. Super nice guy and seemed to be very in touch with his guests and making us feel very welcome. He happily answered my questions and seemed delighted that we all took interest in his careful preparation and skills.

I apologize (again) in advance for the photos, there weren't many places I could take pictures since it was pretty dimly lit except for this giant spotlight in the center of the restaurant, hence the dramatic shadows everywhere.

Eggplant caprese with Tomato Relish, this was a nice little bite. The relish was a nice balance to the fried eggplant and cheese, not greasy or oil at all. Best eaten as soon as served while warm.

Next we have a White Bean Soup with Smoked Scallops and oven dried grape. This went hit or miss on folks, I personally really liked it. The soup had almost a clam chowder like flavor that was a great complement to the smoked scallops. I was asking Chef Watkins whether or not he used some sort of clam juice or fish stock but he said that it was a purely vegetarian soup, no other seafood than the smoked scallops. Very tasty and I liked the dried grape it gave a hint of sweet/sour which was a nice accent to the rich flavors of the soup.

It's hard to see this one from the photo (it was the best of the ones I took) Steak tartare with White truffle, um wow, talk about a bite of heaven. The tartare was very flavorful on it's own, but the finishing flavors of the shaved white truffle really brings a whole progression of taste from the one little bite. I like a good tartare, but it can be hit or miss, sometimes not seasoned well enough it just taste like raw meat, but in this case all these little flavors poped right out.

Crisp Pork Belly with Diablo glaze and Asian Pear Salad: What's to say, it's pork belly and as I've said before you really can't go wrong with pork belly. The glaze was a nice sweet almost smokey taste to offset the richness of the pork. The pear salad was a nice texture change of crunch for the otherwise super tender pork. I think the one little bite is perfect and not too overwhelming.

Last but not least, Braised Beef Short Ribs, apricot glaze, asparagus, celery root puree with a black pepper Gastrique. Only one word for this one: YUM. This was in many books the favorite of the evening. A few of us were listening to the staff's description of the dish and I had to chase down Chef Watkins to confirm one small detail, they had mentioned it was braised for 24 hours! I was curious if had heard the details correctly, perhaps he meant four, it seemed like there would be no way that a short rib would still retain any type of shape after 24 hours of braising. I thought surely he is doing a Sous Vide method, which seems to be popular these days you see it all the time on Ironchef Amercia and Top Chef (heck even I wanna dabble in that but it's a bit too far out of my price range.) Chef Watkins confirmed that indeed he held the braise for 24 hours at a perfect 190 degrees Fahrenheit. Needless to say this thing would fall apart if you looked at it funny, but the flavors were extremely good, you got sweet, a little spicy, and all of the flavors in the braising liquid. Very visually pretty, lots of attention to detail was paid here for every one of the little dishes. Yeah I had seconds, and yeah there were folks that went after 3rd, 4th, 5ths.

I'm very happy that they chose to concentrate on a few dishes, it makes taking notes and recalling the tastes and event a lot easier. Besides, it really lets them put full attention to detail and bring forward their best. Although only five dishes, there was no lack of food, I mean folks were turning down pork belly towards the end of the night as they had so much to eat :)

As always great seeing all my blogger friends. A big thanks to The Carillon and their very nice staff for having us over, I had a wonderful time. I've already marked a few things on the menu that will require my return.
beef bloggers event foodie off topic pork short ribs soup yammering

Ironjack said…
Were you there? well next time! I think I might be able to make the next potluck maybe there :) thanks for dropping by.
January 29, 2010 at 8:50 AM

Laura said…
It was good seeing you too. Great photos! You did really well in difficult lighting.
February 1, 2010 at 6:22 AM

Ironjack said…
@Laura always great seeing you! Had a great time hope to see you soon.