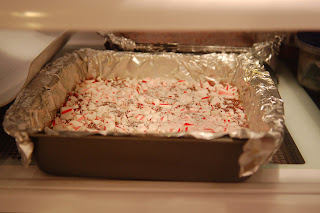 So every year my wife and I like to give homemade gifts from the kitchen. This year we decided to go with a bundle of fudge. This sounded like a fairly easy and straight forward idea, it turns out there's a lot more to fudge than melting some chocolate. After 3 messed up batches and a pot that has been completely ruined, I have to say I've learned a lot about fudge and the science of candy making. For you're reading pleasure I present to you my trials and tribulations.

I'm not a sweet's person, I actually dislike chocolate and ice cream ( I know I hear the gasps all the time), so I've never actually had fudge before. This really presents a challenge when that's the gift I'm to be giving. My wife was armed with a handful of recipes, and after reading them thru, I thought, how hard could this be. Turns out, VERY...

Good fudge, I learned cannot be shortcutted, the very best you can do is to take out insurance to make sure you don't mess it up. The idea is that the fudge melts evenly across the palate and the richness and flavors all come together in one smooth yummy melting bite. This is accomplished by a good bit of food science. You'll see other recipes all about melt chocolate and have it set, no, that's not true fudge. True fudge is made with precision temperature, a good bit of luck, and maybe some witchery that I learned from a kind elderly store clerk that passed me her secrets from her father. I also made use of a bit of emergency DVD episode viewing of Alton Brown's fudge recipes to understand what the heck was going on.

Ok, you can stop reading here if you don't want to hear about the science, I really dig this stuff so I'll be a bit of a windbag here.

The even melt in your mouth effect of fudge comes from the fact that there are millions of little sugar crystals that are held separated by fat and different sugar molecules. In order to accomplish this you have to basically boil away enough of the water to get the sugar into soft ball stage. After destroying 3 batches and losing my favorite pot, I learned about fudge making from a nice lady at the store I bought my replacement pot. Apparently, soft-ball stage is when the sugar is boiling to a stage that you take the super heated sugar and drop it in a some water. The result must be a ball "dropplet" (no strands) that yields under a squeeze between your thumb and forefinger, or just buy a nice candy thermometer that just tells you when that is (I believe 134 F)

The danger when you've got the sugar in a super saturated state is the slightest bump, dust, or agitation will cause the sugar solution to create a seed crystal, all the other sugar molecules then latch on to the seed crystal to form large large granules and the result is a "seized" fudge (yes it turns hard as a rock the next day). You can take out a bit of insurance in the form of fats, and alternate sugars such as corn syrup, cream of tartar, etc. Purist tend to scoff but my ruined pot made me a bit skittish. These items act as blocks between sugar molecules to prevent seed crystals from forming prematurely.

I found that once we moved the sugar off the heat it was basically safe to add the last ingredients when the sugar stops "boiling". This has slowed down the sugar molecules sufficiently such that adding the last ingredients do not cause seed crystals to form, and hence no seizing. Alton suggests when sugar has cooled to 110F and the lady at the store said, "just take it outside by the time you get there you can beat the fudge". Then you need the sugar to actually start forming crystals, but really really fine ones. This is known as "beating" the fudge, or as I call it, and exercise on trying to break your arm. You end up beating this fudge for nearly 15 mins (and it gets harder and harder as it begins to set). Your done when the fudge has become matte from glossy (probably from all the mini sugar crystals). Pour and set and you're done.

I might have to revise this but hopefully I've saved some folks from some pain. Happy Holidays to all!
candy dessert science yammering