A tour of Africa 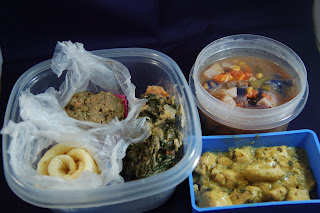 We had a substitute bento eater this week that issued the challenge of African food. I eagerly went on a search for a particular cuisine that would fit the bill. Unfortuneatly, most dishes from any one country in Africa contained pepper or some other spicy tidbit, apparently the African continent is populated with a lot of fans of hot food. So, I took a culinary (virtual) tour of Africa finding recipes that would easily allow me to omit spicy components. This also proved to be the most time consuming of my bentos as I wanted to spend time cooking each individual dish (rather than the usual multitasking/get it out fast method) to fully appreciate and understand the cooking techniques and reasoning behind each recipe. I had an additional last min challenge in that the regular bento boxes were not at the house, so I had to scramble with some creative packaging. So with no further ado, here is the bento.

We start our journey in Kenya, this dish is called Kuku Na Nazi. It's a chicken coconut curry which is fantastic. It takes about an hour to put together. I kept extending the cooking time to really let the chicken break down(I chose breast meat for the healthy aspect). I had to cut some corners using lite coconut milk (and not a full measure of it) and knocking back the butter. I'm sure if I followed the recipe in full, it would have been even better, but I think my final version turned out really well. I think making use of fresh herbs instead of the powdered versions helped me out a lot.

Next we have an Ethopian Lentil salad. Lentils are a funny thing, as my wife puts it, they look horrible, but taste great. I had to use the parsley in the picture to even remotely make it look appetizing :) This is a cold lentil salad pared with something of a viniagrette dressing. The dish is very refreshing and light tasting due to the lemon juice and the fresh parsley and basil. It actually tastes better the next day as the lentils had a chance to absorb some of the various flavors.

We hop over to Cameroon next with Egusi Spinach. I've never used Egusi before and needed a quick lesson. Egusi seeds come from a cucurbitaceous plant, the seeds are both high in protein and fat. I was highly surprised at the effect of adding ground egusi seeds to this dish. I'll admit it wasn't the most popular, (receiving only one positive vote for it) but from the food scientist in me it was the most interesting. Where do you get ground Egusi? Well it just so happens we have one very obscure, very hidden African grocery store. The nice store owner was happy to point me to the right aisle. The Egusi when cooked turned the spinach into more of a creamed spinach consistency that I had not expected. The end dish was a little bitter and probably turned off a lot of my eaters, but in the name of authenticity, I think I had it right.

As we move deeper into our winter months, I'll be packing soups and stews to keep my audience warm. We move to Tanzania next with a peanut vegetable soup. Again, the ingredients and recipe blew me away. The vegetables were very ordinary, it was the spices that it called for that really made the soup, no salt at all. I had feared that there must have been some mistake, but when the soup finally came together the cinnamon, ginger, cumin, and touch of cayenne, mixed with a peanut butter base really came together. It's not a bold soup by any means, but all of the flavors represented themselves nicely.

For dessert we end our trip in Morocco with a traditional dessert called Beghrir. It's a crepe/pancake that uses yeast to give it some fluff and uses semolina flour along with normal AP flour. The recipes treat it much like a pancake, so I decided to put a spin on it and create a honey rosewater syrup (it seemed appropriate). For plating I cut the Beghrirs in half and arranged them in a rose shape so that it would match the syrup I used.

All in all, this was a very educational experience for me. It required a bit more work and research but I think I answered the challenge issued. As always, thanks for stopping by, and if you want any of the recipes I'll happily respond to the comments and put them there.

As promised I've started putting up food blogs I follow. Please go and visit and support them, they are a wonderful source of inspiration for me and many have helped encourage me along in my own adventure. I'll be adding to the list as the days go by.